A native of Morris and a fifth-generation Stevens County resident, Matt graduated as salutatorian of the Morris Area High School Class of 1997 and attended college at the University of St. Thomas in St. Paul, MN, where he graduated cum laude, with degrees in Political Science, Legal Studies, and Russian, in 2001. He then attended the University of Minnesota Law School, earning his juris doctorate in 2004. Having realized early on in law school that life in the Metro area was not for him, Matt returned home to Morris over summers to work as a law clerk for the firm, and upon taking the Minnesota Bar exam in July of 2004, moved back to Morris permanently.

With an eye for details and a desire to help people in a “concrete” way, Matt focused his practice in real estate transactions and title work, estate planning and probate law, following in the footsteps of his father, Michael Fluegel. Recognizing a vested interest in the continued growth and prosperity of Stevens County and the surrounding area, Matt participated in the Blandin Leadership Program in 2004, making connections that have continued to serve him well to this day. Matt has also been involved in the Kiwanis, PlayRights Community Theatre and Habitat for Humanity. He serves as the president of the Morris Industrial Development Corporation, is the current president of Faith Lutheran Church and is a member of the Morris Public Schools Foundation Advisory Board.

Matt married his wife, Molly, an Appleton, MN native and paralegal, in the summer of 2007. Their family includes their son, Cooper; daughter, Anastasia; daughter, Ariel; and an elderly chocolate lab/border collie mix named Cubby. Balancing their young family and busy work schedules is a trial, but both find time to stay active (mostly chasing the kids!). When he does get a spare moment, Matt enjoys home improvement projects, hunting, playing darts, reading and spending time with family and friends. 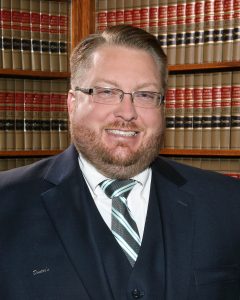