Dave McLaughlin has been practicing law since 1981. He practiced with a firm in Mankato for three years and began practicing in Ortonville in 1984. Since 1987, his practice has focused almost exclusively on farm debtors. In 1993, Dave’s law firm merged with a Morris firm to establish the current firm.

Dave received his law degree from William Mitchell College of Law in 1981. He has a degree in Social Sciences Education from the University of Minnesota, Duluth. He grew up on a farm in rural Ortonville and is a graduate of Ortonville High School. He served in the Navy from 1969 to 1973.

Dave finds a great deal of satisfaction in working out financial resolutions that allow farmers to keep operating. He has resolved debt disputes with Farm Credit Services, a number of area banks, Commodity Credit, Farmers Home Administration, the Internal Revenue Service, the State of Minnesota, and other creditors. The debt situations have been resolved through negotiations or, when necessary, bankruptcy filings. He has used Chapters 7, 12 and 11 to protect his clients’ interests. “The vast majority of my clients are still actively engaged in farming,” he said.

In addition to his primary practice, Dave has served as the attorney for the city of Ortonville for many years. He has also served as general counsel for Western Minnesota Municipal Power Agency (WMMPA) for approximately 18 years. Western Minnesota has issued debt for power projects in Iowa, South Dakota, and Wyoming. The most recent project Dave has assisted WMMPA on is the Red Rock Hydro project near Pella, Iowa.

Dave is active in his church, having served as both the church president and secretary. He has also been active in the Democratic Party in the area. He and his wife, Patti, live in Ortonville, where they have raised four children. 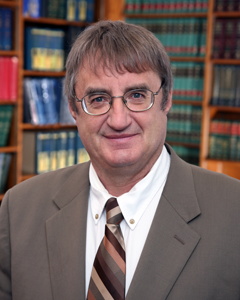