Born and raised in the Morris area, Bob Dalager has been practicing law since 1977. He was a solo practitioner in Morris for two years, until he joined Michael Fluegel and Warrenn Anderson at the current law firm in 1979. He served for a short time as Morris City Attorney and Assistant Stevens County Attorney in the early 1980’s. Since then the emphasis in his practice has been family law and criminal defense. He is a qualified neutral arbitrator, mediator, and early neutral evaluator.

Bob spends a great deal of time in the courtroom, trying criminal and family law cases. He has also represented the prevailing party in several leading family law cases at the appellate level. He has served as a panelist for a Minnesota Continuing Education Family Law Institute on farm divorces and is a member of the Family Law Section of the Minnesota State Bar Association.

Bob is an active volunteer in his community. He has twice served as President of his church congregation and has been a member of his church council. He has served as National President of Pheasants Forever and was active in starting the first local chapter in Stevens County. He has been a Little League coach, Boy Scout advisor and Girl Scout troop sponsor. He has served on the Morris Planning Commission and was a director of Pomme de Terre Golf Course and of the 9F Sportsmen’s Club. He sang in a barbershop choir and has been a Mason and a Shriner. Local community members may know Bob best for his powerful voice that can be heard singing at church or cheering on teams at local sports events.

Bob and his wife, Vicki, live in Morris and have raised two children. Vicki is an active community volunteer, a licensed daycare provider, and she and Bob have been foster parents since 1989. Bob enjoys running and training field trial dogs and hunting waterfowl and upland game. He recently started studying French at the University of Minnesota, Morris and is having a great time learning to “parle Francais”! He also is a family law Early Neutral Evaluator, a mediator, and a qualified neutral arbitrator. 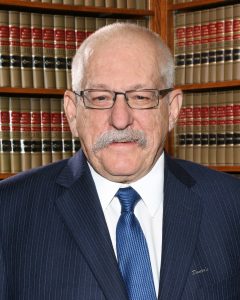